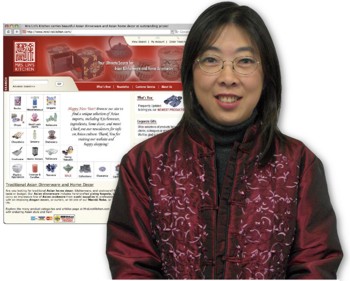 In California, it's easy enough to find items like Asian foods or specialized kitchenware - nearly every major supermarket has an aisle devoted to foods from the Far East. People in other parts of the country are not always so lucky, but they can now get those items by shopping online at Hacienda's Mrs. Lin's Kitchen ( mrslinskitchen.com ).

"We take it for granted, but if you go to Colorado or maybe Michigan, they don't have that luxury - their regular grocery stores don't have an Asian section," says Julie Hsu, the company's founder and CEO. "That's where they find us."

Hsu - who really is married to someone whose last name is Lin - founded the company in 1997, leaving a research position with the USDA to jump on the Internet wave. ""I have a food science background, including a master's degree in agriculture and environmental chemistry, and I wanted to do something related to food," she explains. "I started doing gift baskets and things, all food related. I started the company from a spare bedroom and kept the items in the garage. I think it was less than 50 items that I offered then."

When the company began, she offered a number of food products, but the focus has changed over the years. "As time goes on, people are always asking for different kinds of stuff, so I saw a need and a niche and I started adding sake sets and chopsticks and different lines. Our biggest sellers now are chopsticks, sake sets, and sushi related items including rice and rice vinegar. Most grocery stores sell long-grain rice but you can't use that with sushi - it will fall apart. Sushi uses a short-grain rice that's a little stickier."

The company, now entering its 10th year, survived the dot-com bust and is still growing. Mrs. Lin's Kitchen left the spare bedroom in Hsu's house and also outgrew a commercial space in San Ramon before moving to Hacienda last year.

Hsu's first efforts at promoting the company included advertising in newspapers and magazines. Most of her business now comes from repeat customers and referrals, but the company has also benefited from exposure on The Food Network and DIY Network as well as features in magazines including Sunset and Food and Wine. "It's like a snowball that gets bigger and bigger," Hsu says. "Getting PR from all these places helps a lot."

As might be expected for an online retailer, Mrs. Lin's Kitchen has customers all over the world. "Most of our customers are in the U.S., but I have customers as far away as Israel and Australia, as well as England, Germany, France, Spain, and a lot of other European countries. I've even sent things to Japan."

Hsu plans to continue adding new products and seeks to branch out into different product lines. "We have a small section of giftware now like charms and Japanese Maneki Neko, the Japanese lucky cat. Those are popular, so giftware is one of the sections that I would like to expand."