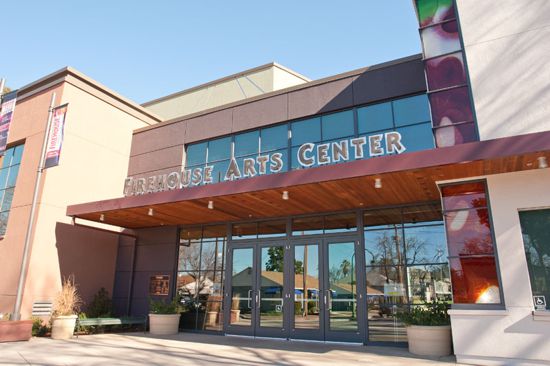 When Pleasanton's main firehouse was opened in 1929, it was constructed from locally manufactured bricks and served a population of 1,000 people. In 2010 - 81 years later - that same structure reopened, after extensive renovations, as the Firehouse Arts Center, and to date thousands of people have enjoyed music, theater, comedy, film, and more at this world-class venue. "Because the Firehouse Arts Center is owned and operated by the City of Pleasanton, the advent of this facility allowed us to expand our programs and offerings for the community," says Firehouse's Rob Vogt.

The Firehouse Arts Center consists of a 221-seat theater, a 2,000 square foot fine arts gallery, an 1,800 square foot classroom, and a grand lobby that connects downtown Pleasanton with the center's 3,000 square foot outdoor patio and the adjacent Lions Wayside Park. The facility's variety of rooms creates space for a variety of uses.

"The Firehouse Arts Center is a source and resource for performing and visual arts experiences for Pleasanton and the Tri-Valley. We have a wide range of offerings for all ages. For those just looking to observe, we have our theatrical productions, music concerts and art exhibits," says Vogt. "For those wanting to participate in a more in-depth experience, I am proud of the variety of youth programs that our staff has developed. Whether it is the first experience on stage for kids as young as five years in Little Performers, or as a cast member of a full-fledged children's theater production by our very own Civic Arts Stage Company, or a year-long commitment as a company member of our award-winning teen improve troupe, Creatures of Impulse, there is a youth performing arts program for all levels of experience. We have also responded to a need for classes in the visual arts for elementary and middle school kids. As part of the City of Pleasanton's Community Services Department, we also are able to offer programs for adults in various art media, such as watercolor, pastels and pencil." The facility is also available for private rentals.

A number of impressive and memorable acts have graced the Firehouse stage in the six-plus years since the facility's grand opening. Seventies hit-makers like Pablo Cruise and Mickey Thomas' Starship have brought their platinum sounds to the Firehouse, along with cabaret chanteuse Wesla Whitfield and contemporary artists like Red Molly.

"We are proud of the variety of shows that we have been able to present to the community over the last six years," says Vogt. "We do our best to offer something for everyone, but our most popular shows tend be our rock 'n' roll shows as well as our musical theater productions by Pacific Coast Repertory Theatre."

Great musicians are a constant at the Firehouse. Grammy-award winning pianist George Winston, who first found acclaim in the 1980s with his albums Autumn, Winter into Spring, and December, appears on July 23. Singer Joni Morris, a Firehouse favorite, returns with her Patsy Cline tribute show on Sunday, July 31.

"We always sell out our shows that celebrate the music of popular music icons: Elvis, Johnny Cash, The Beatles, Billy Joel, Motown, John Denver, and Patsy Cline to name a few," Vogt says. "There is one show in the spring that has become a tradition at the Firehouse. It is our Memorial Day tribute to the sounds of the USO era (40s and 50s), with the Swingin' Blue Stars of the USS Hornet. It's a show in the style of the Andrew Sisters, and they always honor each division of the armed forces. The gals are really a class-act."

Vogt is also keen on the upcoming Pacific Coast Repertory Theatre season, which will feature productions of My Fair Lady , Anything Goes , and Evita .

The upcoming concert season is packed as well. "Our concerts will feature music acts with some high-quality tributes to some very recognizable names: Everly Brothers, John Denver, Elvis and even Led Zeppelin! But I have to admit I am most excited about those acts that folks may not recognize, but I do hope they come check them out," says Vogt. "Our opening act this season is Ariana Savalas - yes, she is Telly Savalas' daughter - who will be singing everything from jazz standards to her interpretation of current pop tunes. This woman has such a rich tone to her voice and charismatic stage presence that really captivates audiences. Similarly, Marc Broussard brings his rich baritone voice to the Firehouse, but with original songs that draw from his Louisiana routes, with a mixture of R & B and Blues styles. Again it's the effortless voice, the quality story-telling in his songs and the ease of his stage presence that draw you in. And lastly in the late winter, I am excited about a group called We Banjo 3. It's actually 4 guys from Ireland, who have taken the folk music-world by storm. In addition to banjos these guys play fiddle, mandolin, guitar, percussion and they sing! Incredible musicians, great voices and a high-energy show - you can really tell that these guys just love performing! Recently, they even performed at the White House!"

The Firehouse Arts Center is located at 4444 Railroad Avenue in downtown Pleasanton. Information is available at (925) 931-4850; the box office can be reached at (925) 931-4848. For a complete listing of upcoming events or to purchase tickets online, access www.firehousearts.org .